Nissan ARIYA at the Fully Charged Outside show

From Whatcar? - they went behind the scenes with Nissan to cover the Ariya at this years Fully Charged Outside show. 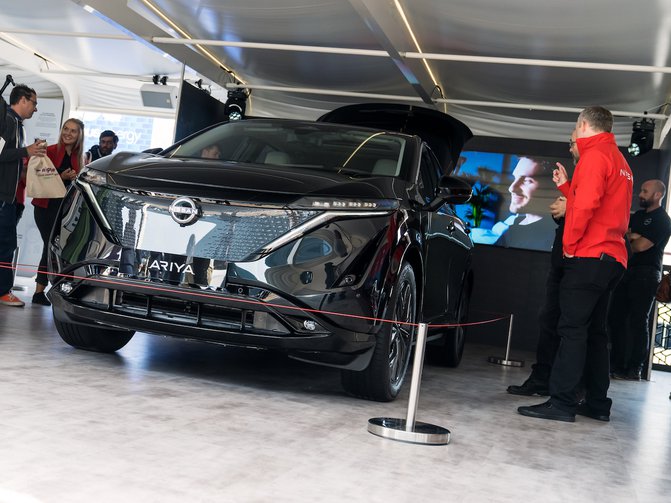 When it comes to electric driving, events don’t come much bigger than Fully Charged Outside. The brainchild of Red Dwarf actor and EV enthusiast Robert Llewellyn, this EV-focused showcase has grown significantly in scope and scale in recent years. Nissan had a prominent stand highlighting every aspect of its 360-degree approach to electric driving – including a chance for the UK public to see a prototype of the all-new all-electric Nissan ARIYA for the very first time.

“After the difficult year we’ve had, it’s fantastic to be out, meeting customers and the public. With our heritage as the originators of mainstream electric vehicles through the Nissan LEAF, we don’t need to convince anyone at this show that the world is ready for EVs.”

“We’ve always found that early electric adopters are incredibly knowledgeable and informed, but that means they ask us difficult questions. That’s why events like this are important, because we can bring out our best experts to answer those questions. But, while early adopters are already confident with elements of electric driving, such as range and charging, as electric driving moves mainstream we need to talk to a new set of people to explain how easy and low-cost electric car ownership can be.

“This was also a fantastic opportunity to give the all-new, all-electric Nissan ARIYA its UK public debut – a car that is really going to take EVs to the next level. We started with the Nissan LEAF 10 years ago, and that’s done a huge job for us, now we’re ready to move the game forward with the Nissan ARIYA.

“I call the Nissan ARIYA a no-compromise electric car. It’s our first electric model designed from the ground up, on a whole new dedicated EV platform. So, you’ve got this beautiful sleek coupe crossover profile. Because we’ve done away with the engine, you’ve got a wheel in each corner, which improves the ride and handling, and inside creates this beautiful flat floor. Really beautiful space – so much more space than a typical car of this size – and luxurious design.

“Then, you touch the accelerator, and it goes like a rocket. It’s got 600Nm of torque, which is only 37Nm less than a Nissan GT-R. It’s an incredible machine. But it’s silent; it’s economical. It’s simply the best car that Nissan can build today – and that’s the benefit of designing an EV from the ground up. It gives the engineers this opportunity to build the perfect car, and it’s going to move the game forward.”

Here is a great walk around video of the Ariya at the show: